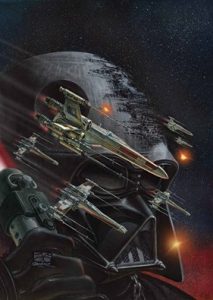 I’m saddened to see the Darth Vader series ending with DARTH VADER #24 and #25, both offered in this month’s Marvel Previews catalog. I expect the finale will be spectacular, as this series has been top-notch, exploring how Vader regained the Emperor’s trust after the destruction of the first Death Star. If only he had recovered those stolen battlestation plans before they got into the Alliance’s hands. Now that he knows his position is precarious, I can only hope there will be more of Vader’s own secret machinations in Marvel’s future.