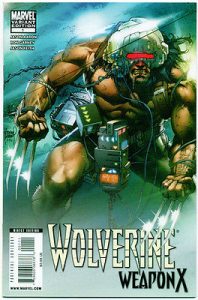 There was an awesome Wolverine scene in X-Men: Apocalypse, where we get to see his escape from the Weapon X program in that iconic test gear. This outfit was introduced in Barry Windsor-Smith’s run of Marvel Comics Presents #72-84 from 1991 which finally told the story of Logan’s time in the Weapon X program. (Weapon X was the code name for Wolverine from his very first appearance way back in Hulk #181.) In 2002, Grant Morrison would expound further on the Weapon X program in his run on New X-Men #142-145, revealing the X was actually the Roman numeral ten, with nine previous experiments before Wolverine. (Weapon I was rumored to be the super soldier serum that produced Captain America.) In 2009, Jason Aaron wrote a series Wolverine: Weapon X which delved further into the program as Wolverine goes on a rampage of revenge against the agents of the program. Spiral Comics has one copy of the variant cover of the first issue of this series in our eBay store. It features the iconic Weapon X suit drawn by Adam Kubert.