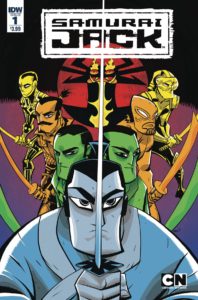 The hero of the critically acclaimed television series is back…Samurai Jack! This was such a cool cartoon series, and he’s so worthy of continuing adventures in comic book form. No small part of the charm of the TV series was that ‘dystopian retrofuturistic Earth’ inhabited by robots, extraterrestrials, talking animals, monsters, magical creatures, and deities. I hope this is the ‘suprisingly familiar’ part.

“A ruthless biker gang ambushes a royal envoy. The name of their leader? SAMURAI JACK. From the team that brought you HELENA CRASH comes an all-new take on the legendary wandering samurai that is completely different and yet surprisingly familiar. Wait, what? How is that even possible? YOU GOTTA READ SAMURAI JACK: QUANTUM JACK TO FIND OUT.”