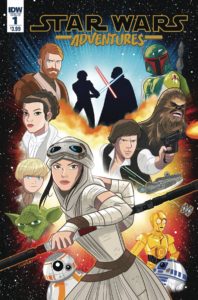 More Star Wars comics are finally here! Targeted more for the ‘all-ages’ group, this series from IDW will tell stories that are less involved than those over at Marvel, but still starring major saga characters from throughout the entire saga timeline!

“Introducing an exciting new era in all-ages Star Wars comics. Each issue in this monthly series will feature two stories, starring your favorite Star Wars characters from all the films. This debut issue will reveal Rey’s early adventures on Jakku as well as a comical tale of clone catastrophe.”