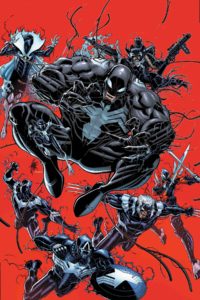 Oh, very cool. I should have seen this coming after Edge of Venomverse, as it’s a mirror storyline of the Spider-Verse. I’m excited to see the Venomized versions of familiar and obscure characters. You know, this is a trend now. Maybe it started with the Captain Universe Uni-Power which explored what several heroes would do with the Uni-Power in the mid-2000s, but Spider-Verse really paved the way for, not only Venomverse, but also what DC is doing with Dark Nights: Metal and all the evil Batman-ized versions of their iconic heroes. It’s kind of a cool way to generate a bunch of characters and see which ones resonate with fans. Those versions usually end up with a publication life beyond the storyline event, like Spider-Gwen has. Who will survive Venomverse…?

“THE VENOM EPIC OF THE FALL STARTS HERE. During a routine battle with the villainous Jack O’Lantern, Venom finds himself transported to a far-off world and learns a terrible truth – a deadly new species called the Poisons has emerged from the vastness of space, and to make matters worse, they’re hunting Venoms. Trapped on the planet’s surface with a ragtag band of Venomized heroes, Eddie has no choice but to mount a counteroffensive and hope to find a way home.”