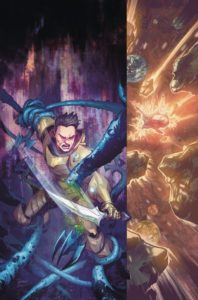 The debut of a fifth Catalyst Prime series. Lion Forge is creating something massive with their superhero universe.

“The most dangerous corners of the universe live inside the nightmares of super-powered people. Magnus Atitarn, heir to the Atitarn Satellite Corp., tried to save the world with his experimental one-man spaceship — and ended up a broken man. Now a celebrity joke suffering from Post Traumatic Stress Disorder, Magnus has the power to travel inside the mind of super-powered people, where he discovers nightmares which threaten the entire human race.”