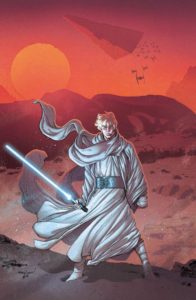 “THE ASHES OF JEDHA. KIERON GILLEN’S FIRST ISSUE ON STAR WARS. The Rebel Alliance turns its attention to the shattered planet of Jedha. Once the site of great significance to the Jedi, Jedha was left in ruins when the Death Star annihilated the Holy City there. Now, new series writer Kieron Gillen joins artist Salvador Larroca to bring Luke, Leia, Han, and the rest to the remains of the tragic victim of the Empire’s fury. Rated T”