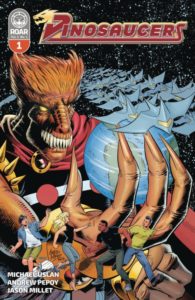 This one reminds me of the old ‘V’ television series. Creepy.

“Reptilon has just found its sister planet-Earth-complete with water, fauna, and a billion pieces of MEAT. The Voyager has been peacefully traveling through space for years when, unexpectedly, it’s attacked by an alien, laser-shooting space shuttle. The attackers? Fully evolved, advanced humanoid dinosaurs who’ve destroyed their home planet and are now on the hunt to commandeer a new one to expand their empire.”