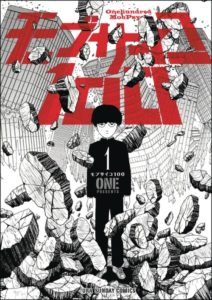 Popular anime with a Netflix live-action series gets a manga treatment from Dark Horse!

“From the creator of One-Punch Man. Do you or someone you know need an exorcist who works cheap? Reigen’s your guy. What’s his secret to busting ghosts while keeping prices low? Well, first, he’s a fraud, and second, he pays the guy who’s got the real psychic power-his student assistant Shigeo-less than minimum wage. Shigeo is an awkward but kind boy whose urge to help others and get along with them is bound up with the mental safety locks he’s placed on his own emotions. Reigen knows he needs to exploit Shigeo to stay in business, yet for better or worse he’s also his mentor and counselor. And he also knows whenever the normally repressed kid’s emotions reach level 100, it may unleash more psychic energy than either of them can handle. The subtitled anime is available on Crunchyroll. The dubbed anime is available on Funimation. The live-action TV series is on Netflix Original.”