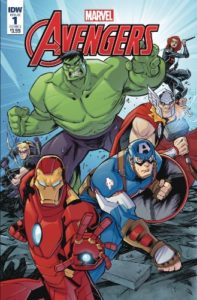 IDW adds a second title to their ‘MARVEL ACTION’ line of all-ages Marvel stuff. I think this is actually a good thing. IDW has shown a real talent for this demographic niche, and it leaves Marvel to concentrate on what they do best.

“A new era of all out Avengers action begins. A new team is formed to battle a mega-sized threat that is weider and wilder than any of the superheroes have met before. This new ongoing series will be the perfect opportunity for middle grade readers, and fans of all ages, to experience the thrilling adventures of Avengers comics for the first time. Avengers stories that are epic, weird and above all: fun. From the creative team that brought you the hit comic Title of Book. Your favorite heroes along with surprise team members.”