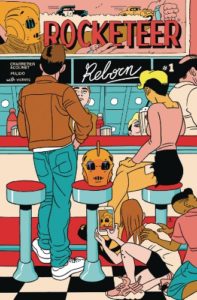 Hey, this looks interesting. This isn’t a reboot/rehash, as much as it’s an extension of the story eight decades later.

“A Rocketeer for a new century. It’s been 80 years since Cliff Secord first found an experimental jet pack and soared through the skies as The Rocketeer, becoming a hero along the way. Now, decades later, The Rocketeer is all but forgotten, a legend of a bygone era-until Cliff’s jet pack is found, but in a most unexpected way-one that causes conflict for several people, each of whom are drawn to the jet pack… Some for good and some for evil. A pulp-inspired modern-day adventure. First female Rocketeer.”