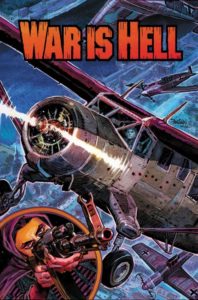 Marvel is celebrating it’s 80th anniversary all year long with tons of cool projects…including one-shots like this!

“ALL-NEW WAR STORY. In honor of Marvel’s 80th Anniversary and history with War Comics comes a brand new edition of WAR IS HELL with two fascinating and soul-crushing tales of War. ‘In the Mood’ by Howard Chaykin takes you to the skies as the Luftwaffe and RAF battle over the English Channel for a battle tale of bitter irony and ‘War Glammer’ by Phillip Kennedy Johnson brings you back to Earth in modern day Afghanistan with a story that will chill you to the bone. Rated T+.”