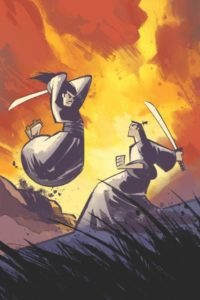 A new Samurai Jack mini-series from IDW! The cartoon was so awesome. If it can’t live on in animation, I love that the story continues in comics!

“‘Samurai Jack 2.0’. Under the leadership of the benevolent Samurai Jack, society has prospered-everything is in line with his philosophies, his storied stoicism, and of course his hair. Of course, this is all news to Jack who doesn’t much care for this impostor using his name. But which one is the real Samurai Jack? A bold new miniseries from Paul Allor (Teenage Mutant Ninja Turtles Universe,Clue) and Adam Bryce Thomas (Sonic the Hedgehog). A new Samurai Jack adventure in every issue.”