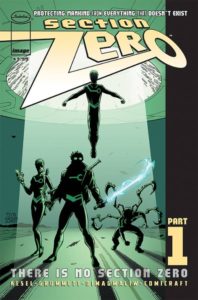 Whoa! The first three issues of this series were published way back in 2000 under Image’s Gorilla imprint, but the series was never completed. There are quality names attached, so no reason it shouldn’t…you know…get all published this time around.

“MINISERIES PREMIERE ‘GROUND ZERO,’ Part One A team of fearless adventurers uncovers the secrets behind UFOs, MONSTERS, and LOST CIVILIZATIONS. It’s ‘JACK-KIRBY-does-The-X-Files’ in this miniseries by one of comics’ classic creative teams-KARL KESEL (Harley Quinn, Superboy) and TOM GRUMMETT (The Death of Superman, Superboy)-and some of the greatest alternative cover artists in the industry.”