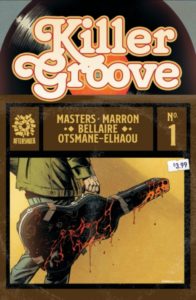 This one looks very intriguing. Aftershock has put out quality stuff for a while now.

“In 1970s Los Angeles, Jonny is one of the thousands of musicians trying to make it big while working a crummy bar job, and getting drunk with his whiskey soaked P.I. friend, Jackie. When Jonny gets tangled up with a local mob hitman, he not only finds a new and violent career, but maybe the inspiration for his music as well. From Ollie Masters (The Kitchen, Snow Blind) and Eoin Marron (HER INFERNAL DESCENT, Army of Darkness, James Bond) comes the next rock’n’roll crime sensation, with a beat that’ll kill you dead.”