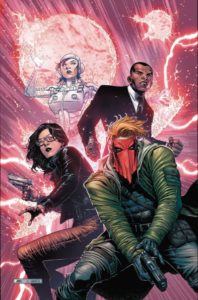 Warren Ellis continues his Wildstorm Universe story with the Wildcats team. This team has been around in comics since 1992! Keep. It. Going.

“They have one job: to save the human race from the human race. And it’s going to kill them. From the pages of THE WILD STORM, the piratical covert team made up of rogue specialists, extraterrestrial soldiers and a mad astronaut, run by a tech mogul and disguised alien king, all here to stop us from destroying ourselves. Case in point: the secret space program Skywatch has been performing medical experiments on abducted innocents for decades. One of those experiments is about to explode-revealing whole new worlds in the battle for sanity that the wild CAT has been fighting. WILDCATS thought their world was strange, but they’re about to find out how strange…and how high the stakes really are.”