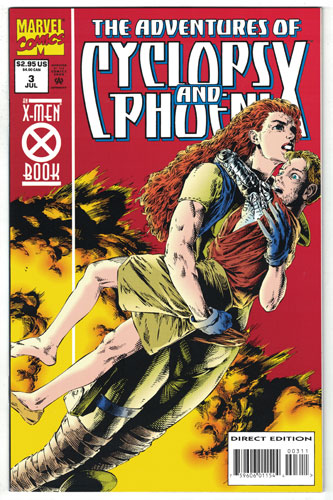 THROUGH THE YEARS. Origin (adolescent) of Cable, Part 3 of 4. Eight years have passed since Scott and Jean first arrived in the far future to be reunited with Scott's young son, Nathan Christopher. Jean continues to train Nate in the use of his powers. For the past few years, Scott and Jean have been members of Prior Turrin's human resistance movement and, during a raid of the labs of the Genetic Hierarchy, they discover a preliminary version of the Legacy Virus, designed to exterminate humans. A trap is sprung, and Ch'Vayre and his men attack. The humans find themselves fighting for their lives. An inner voice guides Nathan to a computer console to destroy the complex, but his work is interrupted by a mirror version of himself, the young Stryfe. Stryfe releases the techno-organic virus in Nate's system, but Nate is able to strike back and knock his clone out.