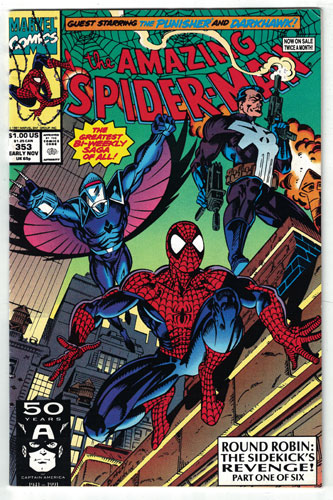 ROUND ROBIN: THE SIDEKICK'S REVENGE, Part 1 of 6: WHEN MIDNIGHT STRIKES! Brief appearance of Punisher. The Secret Empire has transformed Midnight (aka Jeff Wilde) into a cyborg. And designated Moon Knight's former sidekick as the empire's first super agent. But the empire wants an army of super agents. So the subversive organization sends Midnight to bust Dr. Eliot Franklin (aka Thunderball) out of the local jail. However Darkhawk and the wall-crawler are in the vicinity and put the new and improved Midnight thru his paces. Meanwhile across town the Punisher hunts the Secret Empire. And that's bad news for the empire...real bad.