Usagi Yojimbo from writer/artist/letterer Stan Sakai, first appearing in late 1984, is arguably one of the consistently greatest comic books still being published today. The deceptively simple concept of an anthropomorphic, ronin (masterless samurai) rabbit in the feudal era of Japan, wandering the countryside in adventure, will draw you in completely because Sakai is a master storyteller. The rabbit, Miyamoto Usagi, is based in part on the real life samurai, Miyamoto Musashi, and exists among a cast of other compelling animal-based characters. It would be easy to discount Usagi Yojimbo as just another funny animal book born in the 1980s funny animal fad, but this critically-acclaimed series has outlasted nearly every other peer from its day for good reason. While the storyline is mostly episodic, there are longer plotlines being woven into the overall saga with occasional multi-part arcs that can easily stand alone. The other 'Stan' sums up Usagi Yojimbo concisely. 'I think Usagi Yojimbo is one of the most original, innovative, well-executed comic books anywhere to be found. Stan's style of artwork, his crisp incisive writing, and his thoroughly professional pacing, all done in a relaxed and absorbed manner, have provided comics with something so rarely seen in this field--a new literary and artistic approach to illustrated storytelling.' -- Stan Lee

This is a curated list of the current series to help you get started with Usagi Yojimbo comic books. The series listed in this section are predominantly series of individual comic issues, but the list can include digests and softcovers (and even hardcovers) if the material is original material.

As with most creator-owned series, the story is generally contained in a single ongoing series and subsequently collected into trade paperbacks. Usagi Yojimbo has transitioned publishers from Dark Horse to IDW. Dark Horse had a long-running ongoing series (Volume III, 165 issues at final count) that turned into a series of min-series, but there was only one mini, USAGI YOJIMBO: THE HIDDEN [2018] #1-7, before the IDW relaunch. Dark Horse's lone mini-series carries dual numbering, continuing the Volume III numbering after #165 as #166-172. IDW has also started a color classics series to reprint the early issues of the 1987 series. Usagi Yojimbo is so masterfully written, that one can jump on at the start of any story arc and feel right at home with the characters and the world Stan Sakai has built.

Comic books are serialized periodicals. The absolute best place to jump on with any comic series is a series beginning, but, if the run has gotten lengthy, the beginning of a new story arc or of a new creative team are other great--and perfectly acceptable--places to get started right away. This section contains a curated list of the latest issues from current and recent series where you can get started in Usagi Yojimbo. Look below for series beginning or start of a story arc. Subsequent sections explore the subject's publishing history and indicate other less recent places to get started in Usagi Yojimbo.

In modern comic publishing, it's common (and expected) for individual comic book issues to be collected into compilations of trade paperbacks and/or hardcovers, as well as other special compilations. Unlike the individual source issues, the collected editions typically stay in print for long periods and are less 'collectible.' If individual issues are out of reach or are not of interest to you or if you just need reading copies, the following collected editions of Usagi Yojimbo comic books are the most recent in-print editions and are the perfect alternative to get started right away with Usagi Yojimbo. The following compilations are presented in a chronologically-based suggested reading order with softcover editions before any hardcover editions (unless the only in-print editions are hardcover--these are integrated into the softcover list).

Since there are so many Usagi Yojimbo volumes still in print, the list below concentrates on the softcover versions only. Hardcover versions of nearly every item in the list do exist.

Dark Horse published all of the Usagi Yojimbo compilations except for the original Fantagraphics material from 1987-1993, a run of 38 individual issues. Fantagraphics still publishes the compilations of that original comic book series. These issues along with some other miscellaneous material make up the first seven volumes of the Usagi Yojimbo trade paperback series, Books 1-7. Dark Horse began their compilations with Book 8, avoiding some confusion in the chronology, and picked up with a compilation of the Mirage material before their own Dark Horse material. However, Dark Horse stopped reprinting the earliest volumes of their trade paperback series and began a new series of trade paperbacks, USAGI YOJIMBO SAGA [2014-TPB], which collects three of the old volumes into one hefty tome each of the newer Saga series. It's all the same material, just repackaged in larger chunks. They started the Saga series with Book 1, injecting some confusion back into the process of getting started, as there are now two Book 1's. So, if you are interested in reading all of Usagi's adventures chronologically, you should begin with the first seven volumes of the regular trade paperback series (these are published by Fantagraphics). Then you will need to transition into Dark Horse's USAGI YOJIMBO SAGA series--beginning with Book 1--through its existing volumes. Finally, you would transition back to the regular Dark Horse volumes that have not been collected yet into the Saga series. Additionally, Dark Horse has a few other companion volumes specifically collecting the Space Usagi and TMNT related material outside of the main Usagi Yojimbo comic book series. The following list is arranged conveniently for you in chronological publishing order. As mentioned elsewhere in this guide, however, Usagi Yojimbo is a very reader friendly series--one can begin anywhere without feeling lost. Happy reading!

The first appearance of a character in comic book form is often the most valuable issue featuring that character. It's a nice place to get started in Usagi Yojimbo, if it's within your budget. Usagi Yojimbo was introduced in the anthology series ALBEDO [1983] in issue #2. After a few appearances in this series, he moved to another anthology series, CRITTERS [1984]. From there he launched into his own self-titled series and has been in publication ever since.

The original presentation of an origin story or a retelling/recounting of it can be a good place to get started with a character or subject. Usagi Yojimbo's origin story is not essential to getting started with him or to enjoying his ongoing adventures, but it can be found in the first four issues of Volume I from Fantagraphics, USAGI YOJIMBO [1987] #1-4 as an eight-part story called THE SAMURAI. Dark Horse does not have the rights to reprint Volume I, so you'll have to find a compilation published by Fantagraphics if you don't want to splurge for the individual issues. They can be purchased digitally from Dark Horse. The 1996 volume from Dark Horse started with a 4-page synopsis of Usagi's backstory.

Series beginnings are always great places to get started in comic books. Here is the Main Publication History for Usagi Yojimbo comic books. Having been born in the great black and white era of the 1980's, Usagi Yojimbo proved his popularity in anthology titles before getting his own ongoing series. He first appeared in a handful of early issues of ALBEDO [1983] from Thoughts and Images but moved into the early issues of Fantagraphics' CRITTERS [1986] where he had regular appearances before getting his own one-shot. His continued popularity lead to his first ongoing series, USAGI YOJIMBO [1986], but he had a few more appearances in CRITTERS [1986] afterwards as well. Usagi stayed with Fantagraphics until 1992, when he jumped over to Mirage Publishing for a few years, published alongside their premiere creator-owned property, the Teenage Mutant Ninja Turtles. In 1996, Usagi switched publishers to Dark Horse and has been in nearly continuous publication with them since. In 2019, Usagi Yojimbo switched publishers from Dark Horse to IDW with a relaunch. The following list contains Usagi Yojimbo's anthology appearances before he earned his own self-titles series, then the list concentrates on appearances where he was a headline character. See the Secondary Publication History for other minor appearances.

If you've already enjoyed some of the series listed in the Main Publication History above, series from this secondary publication list are very good places to further your exploration. In this section we list smaller appearances of Usagi Yojimbo (UY) in publications where he is not the headline character. Excepting, of course, for ALBEDO and CRITTERS--you can find his earliest appearances in these anthology titles in the Main Publication History. Many of the brief appearance in the list below are reprinted throughout Usagi's compilations. 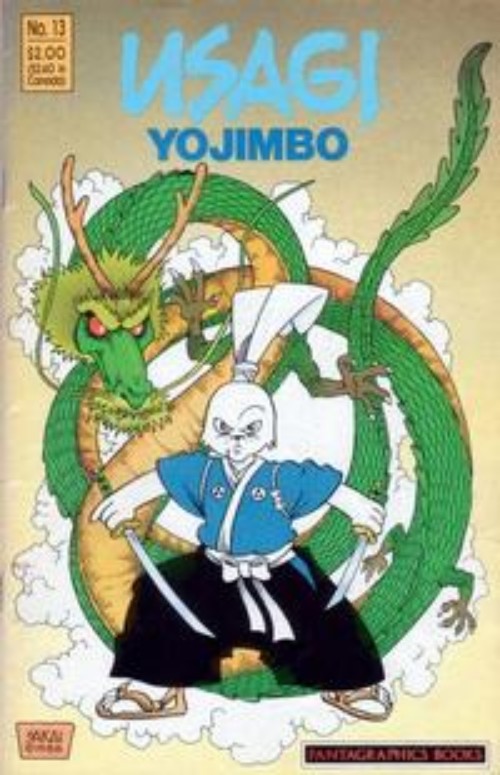 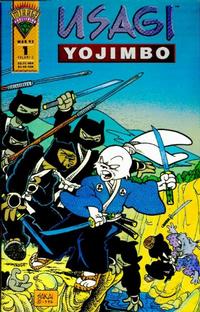 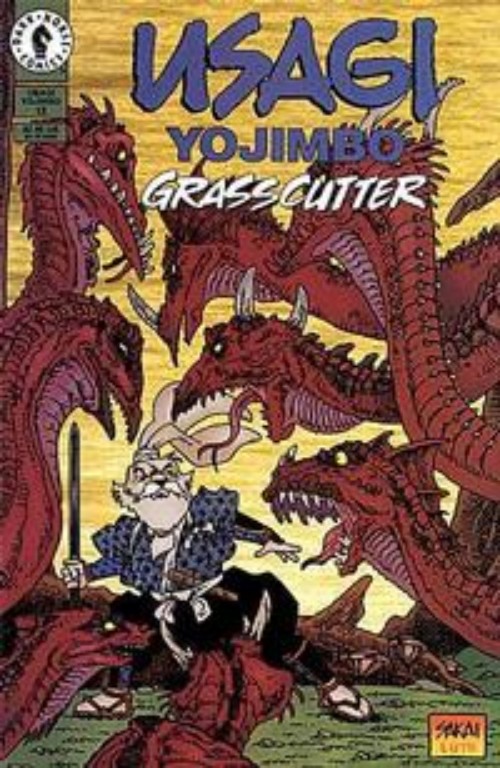 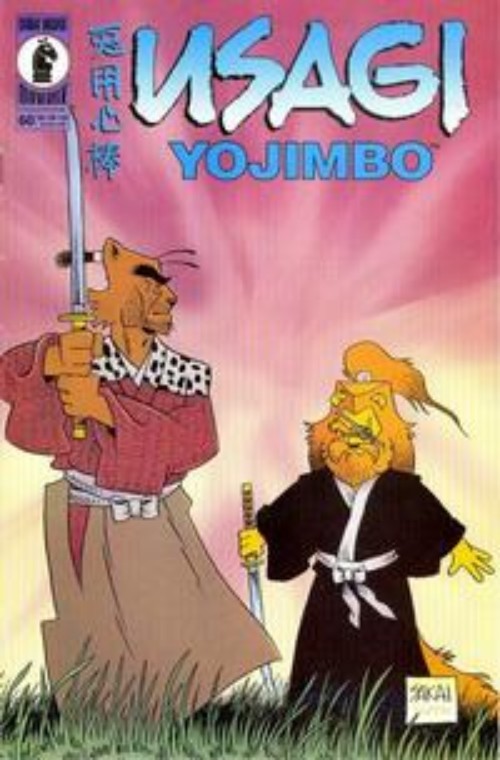 If you've enjoyed non-comic media for Usagi Yojimbo, this section describes the comic book source material for some of the most popular non-comic media. Although he has yet to get his own show, Usagi has appeared in several episodes of several different Teenage Mutant Ninja Turtles' animated television series. These appearances--sometimes in the turtles universe and sometimes in Usagi's universe--are all original material, however, and not based off of any comic book source material. Over time, Usagi and the turtles have become close inter-dimensional allies on television as well as in comics. Usagi Yojimbo has been optioned for an animated television series, so we'll see if it materializes and which source material--if any--it is based upon.

A key issue can be an acceptable place to get started with Usagi Yojimbo, but they are more of a collector's checklist, as they can carry high price tags. The following list includes all of Usagi's early appearances in the anthology series ALBEDO and CRITTERS, as they are all of interest to collectors. 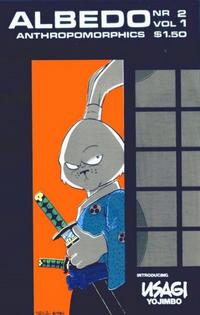 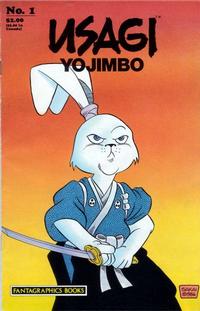 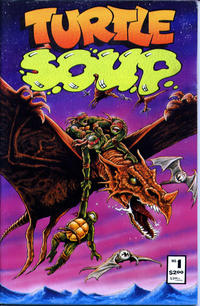 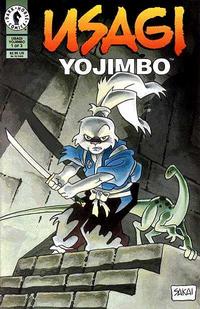