The TEEN TITANS are DC's teenage superhero group formed from sidekicks and other adolescents. There have been a few different groups bearing the name or something similar, as DC has canceled and relaunched the series (as well as their entire Universe) several times. A team book at its heart, the Teen Titans are an ever-evolving team with a rotating roster where the interactions among the members are just as intriguing as the villains they go up against. The first Teen Titans group from the Silver Age consisted initially of Robin (Dick Grayson), Kid Flash (Wally West), Aqualad (Garth) with Wonder Girl (Donna Troi) and Speedy (Roy Harper) added fairly soon. While initially popular, the series was canceled at issue #43 in 1973 which turned into a nearly 4-year long hiatus with a short-lived Bronze Age revival attempt from 1976-78 (issues #44-53).

The Teen Titans became a bigger hit, however, during their 1980s high-quality relaunch as the NEW TEEN TITANS from Marv Wolfman and George Perez. DC borrowed talent from Marvel which perhaps brought with it some aspects of the then growing success, the Uncanny X-Men. The Teen Titans team appeared in DC COMICS PRESENTS [1978] #26 the month before their self-titled series, NEW TEEN TITANS [1980] launched. The team was slightly older and added the now-enduring fan favorite members of Cyborg, Raven, Changeling (formerly Beast Boy) and Starfire. The peak of this new era was arguably the JUDAS CONTRACT storyline, in which their first recruit, the psychopath known as Terra, betrays the team to its biggest archenemy...Deathstroke. The team becomes the NEW TITANS as the members apparently age out of their 'teens.' Dick Grayson would assume his Nightwing identity during this time period, and he would eventually depart the team. After the ZERO HOUR event in 1994, the roster would be nearly unrecognizable from its 1980's beginnings, and the title would be canceled in early 1996.

Later in 1996, the Teen Titans would relaunch from writer/artist Dan Jurgens with a radically new roster of a teenage Atom (Ray Palmer), Argent, Risk, Joto, and Prysm. This second group (Teen Titans II) were genetic experiments created by the evil alien H'San Natall Empire. These half-human/half-alien Titans faced villains like Dark Nemesis and Haze before sales inevitably slumped, and the series was canceled. As the TEEN TITANS [1996] series was collapsing, some other young heroes in the DC Universe, such as Robin (Tim Drake), Superbory (Kon-El) and Impulse, had formed under the name and title YOUNG JUSTICE. The Titans themselves would relaunch in 1999 with the series TITANS [1999] and a more classic line-up of: Nightwing, Donna Troy, Arsenal, Flash (Wally West), Tempest, Cyborg, Starfire, Argent, Damage, and Jesse Quick. This series would run 50 issues and--along with YOUNG JUSTICE--end, leading into the TITANS/YOUNG JUSTICE: GRADUATION DAY [2003] mini-series, which would serve as the relaunching point for two new series: TEEN TITANS [2003] and OUTSIDERS [2003].

Geoff Johns oversaw the 2003 relaunch of the Teen Titans and spawned renewed interest in the franchise, as the series was also relaunched alongside the new, highly successful Cartoon Network animated, anime-inspired television series, TEEN TITANS. The comic book Changeling would resume using his old name of Beast Boy to match the show. A second ongoing comic book title, TITANS [2008] ran from 2008-2011 alongside TEEN TITANS [2003]. The Titans went through roster and storyline chaos as DC experienced multiple 'Crisis' events and other seemingly, rapid-fire event storylines until DC's NEW 52 publishing-wide relaunch reset the entire DC Universe. A new TEEN TITANS series came out of that relaunch, but it was not able to reclaim its Bronze Age glory. The TEEN TITANS series wase subsequently relaunched alongside a new TITANS series during DC's REBIRTH relaunch. The TITANS HUNT [2015] series and REBIRTH re-established the Teen Titans history and returned the team to a classic--and more popular--line-up.

Cartoon Network's TEEN TITANS show and its successor TEEN TITANS GO! are a couple of that network's most successful shows ever--with nearly universal exposure to the entire Millennial generation. The cartoons owe much to the NEW TEEN TITANS [1980] series from Wolfman and Perez, and--as a franchise as a whole--the Teen Titans show no signs of ever completely disappearing from the DC Universe as long as there are young heroes in it.

This is a curated list of the most current series to help you get started with Teen Titans comic books. The series listed in this section are predominantly series of individual comic issues, but the list can include digests and softcovers (and even hardcovers) if the material is original material.

Comic books are serialized periodicals. The absolute best place to jump on with any comic series is a series beginning, but, if the run has gotten lengthy, the beginning of a new story arc or of a new creative team are other great--and perfectly acceptable--places to get started right away. This section contains a curated list of the latest issues from current and recent series where you can get started in Teen Titans. Look below for series beginning or start of a story arc. Subsequent sections explore the subject's publishing history and indicate other less recent places to get started in Teen Titans.

In modern comic publishing, it's common (and expected) for individual comic book issues to be collected into compilations of trade paperbacks and/or hardcovers, as well as other special compilations. Unlike the individual source issues, the collected editions typically stay in print for long periods and are less 'collectible.' If individual issues are out of reach or are not of interest to you or if you just need reading copies, the following collected editions of Teen Titans comic books are the most recent in-print editions and are the perfect alternative to get started right away with Teen Titans. The following compilations are presented in a chronologically-based suggested reading order with softcover editions before any hardcover editions (unless the only in-print editions are hardcover--these are integrated into the softcover list).

The Teen Titans have a long publishing history with many series, and there is still a lot of material in print. Short of reading everything in chronological order as presented in the list below, any of the 'VOL 01' volumes below could be an excellent place to get started with the Teen Titans. Wolfman and Johns' runs are two perennial fan favorites.

The first appearance of a character in comic book form is often the most valuable issue featuring that character. It's a nice place to get started in Teen Titans, if it's within your budget. The Teen Titans has seen several different member rosters in its long publishing history. The following table lists the first appearance of some of the more noteworthy line-ups that kicked off major series.

The original presentation of an origin story or a retelling/recounting of it can be a good place to get started with a character or subject. The 'origin' of a superhero is typically the event or circumstances surrounding how they gained their powers and/or began fighting crime. In the case of a team book, a more appropriate origin is how the ensemble first came together. This section lists some key books that give origin material for the original Teen Titans and the New Teen Titans.

Series beginnings are always great places to get started in comic books. Here is the Main Publication History for Teen Titans comic books. The Titans have had a long publishing history, beginning in the Silver Age and still going strong today.

This section contains a curated list of some of the best storylines for Teen Titans, any one of which can be a good place to get started. Wolfman and Perez's run from the 1980's is generally regarded as the definitive Teen Titans run. Geoff Johns' run from 2003 usually scores near the top as well. THE JUDAS CONTRACT is likely the most famous Teen Titans storyline, but there are many other great arcs to discover as well. Anything from the list below would be a great place to get started with Teen Titans comics. 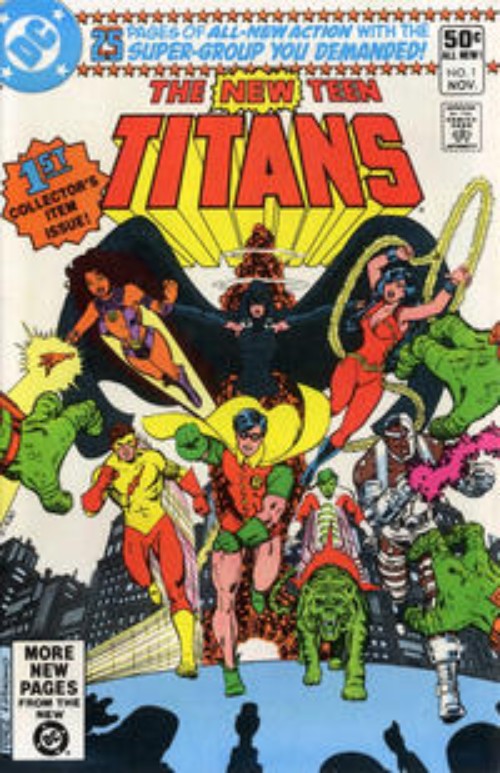 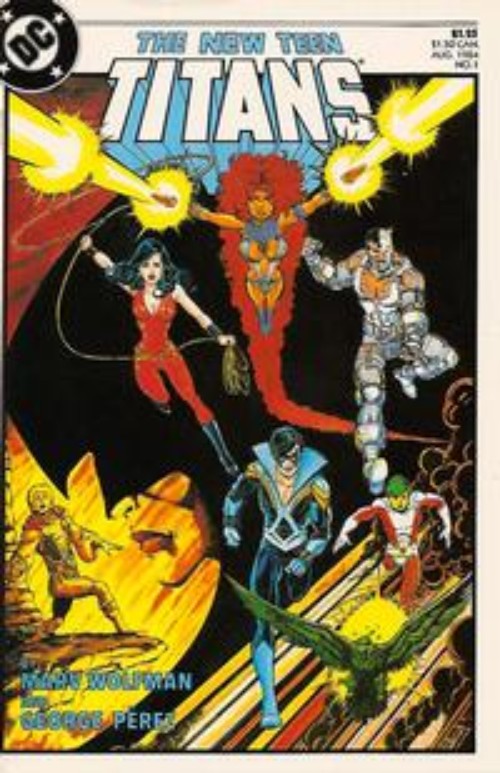 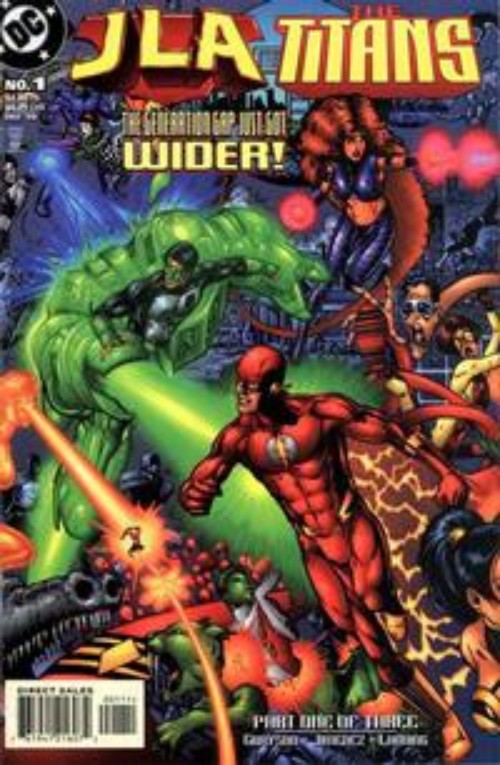 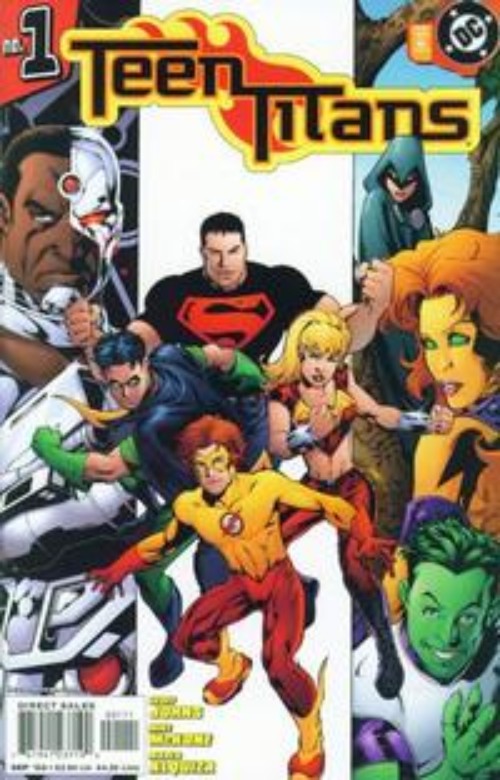 If you've enjoyed non-comic media for Teen Titans, this section describes the comic book source material for some of the most popular non-comic media. Teen Titans have an extremely popular animated television series and have had an equally well-received associated animated film, TEEN TITANS GO! TO THE MOVIES, but they have not yet starred in a live-action film (although much to Robin's consternation, Cyborg had a fairly significant role in the DC's JUSTICE LEAGUE movie).

A key issue can be an acceptable place to get started with Teen Titans, but they are more of a collector's checklist, as they can carry high price tags. There have been many Teen Titans on the team roster, but not all are as popular or memorable as others. The following list includes the first appearances of some of the most iconic Teen Titans members and villains, some of which pre-date the formation of the Teen Titans group itself. 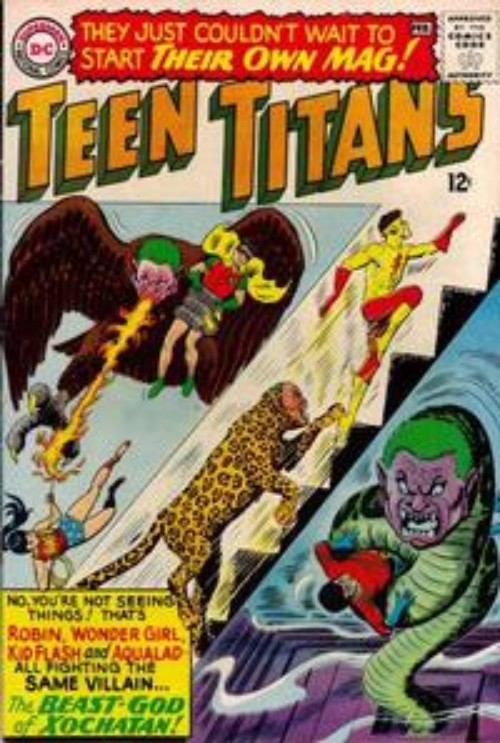 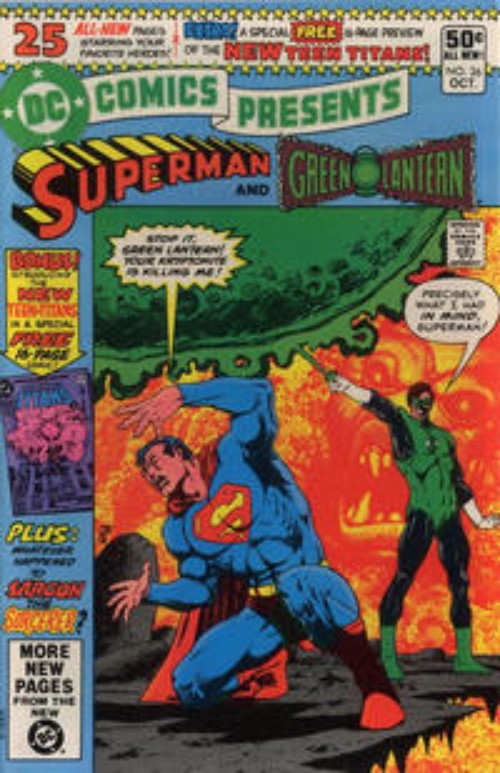 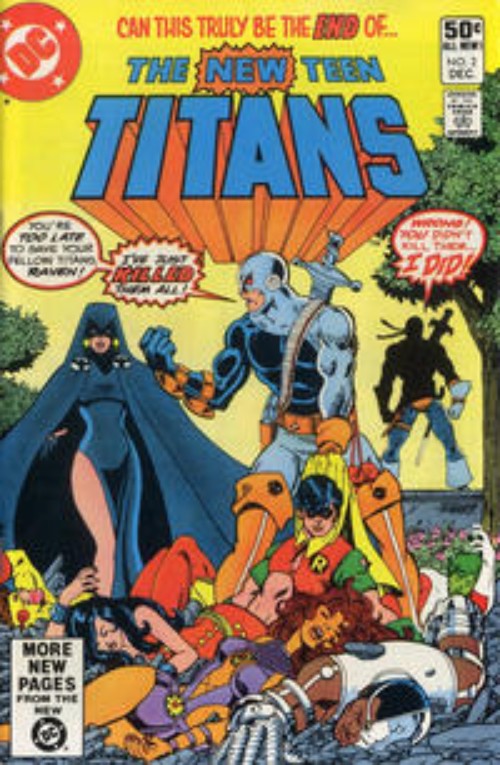 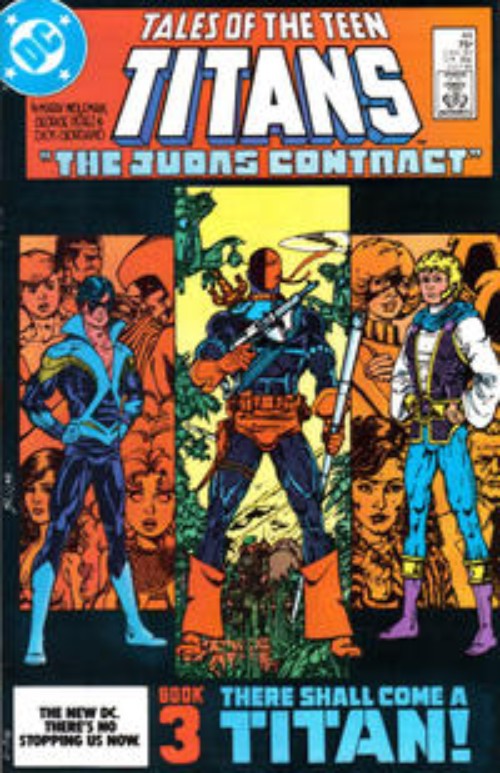