Spongebob Squarepants is that energetic and optimistic sea sponge who lives in a pineapple under the sea in Bikini Bottom, who loves his job as a fry cook at the Krusty Krab, and who gets into all manner of mischief and adventure with his supporting cast of other whacky characters. The Spongebob Squarepants animated television series is Nickelodeon's highest rated and most distributed property, the foundation of a massive media franchise. When not inciting spurious debates, the show is often critically praised for its wit and clever humor.

In modern comic publishing, it's common (and expected) for individual comic book issues to be collected into compilations of trade paperbacks and/or hardcovers, as well as other special compilations. Unlike the individual source issues, the collected editions typically stay in print for long periods and are less 'collectible.' If individual issues are out of reach or are not of interest to you or if you just need reading copies, the following collected editions of Spongebob comic books are the most recent in-print editions and are the perfect alternative to get started right away with Spongebob. The following compilations are presented in a chronologically-based suggested reading order with softcover editions before any hardcover editions (unless the only in-print editions are hardcover--these are integrated into the softcover list).

The first appearance of a character in comic book form is often the most valuable issue featuring that character. It's a nice place to get started in Spongebob, if it's within your budget. The SpongeBob SquarePants characters had appeared before in comic stories within Nickelodeon Magazine and Tokyopop's Cinemanga series, but they never featured in their own comic book until SPONGEBOB COMICS [2011]. Spongebob may not be Smitty WerbenJagerManJensen, but he's still got a #1 issue!

Series beginnings are always great places to get started in comic books. Here is the Main Publication History for Spongebob comic books. Spongebob has had a series of manga-sized digest from Tokyopop and one long-running series from Bongo/United Plankton Pictures with an associated annual series. See the Secondary Publishing History for a series of Free Comic Book Day (FCBD) issues.

If you've already enjoyed some of the series listed in the Main Publication History above, series from this secondary publication list are very good places to further your exploration. Spongebob participated in Free Comic Book Day (FCBD) faithfully.

A key issue can be an acceptable place to get started with Spongebob, but they are more of a collector's checklist, as they can carry high price tags. 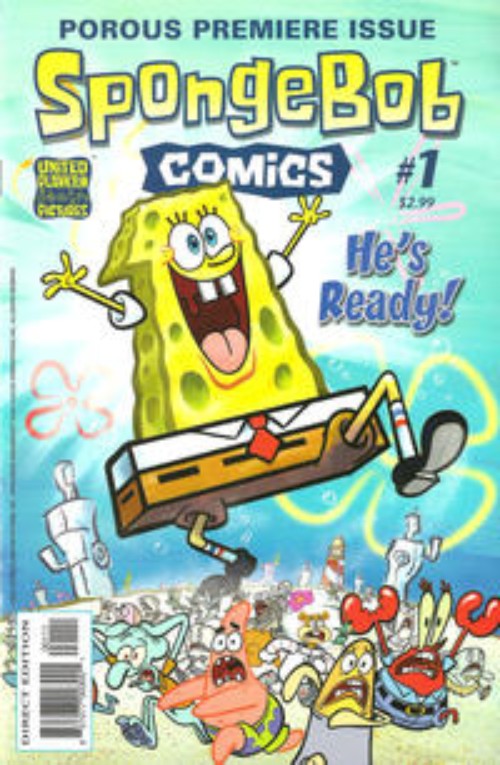