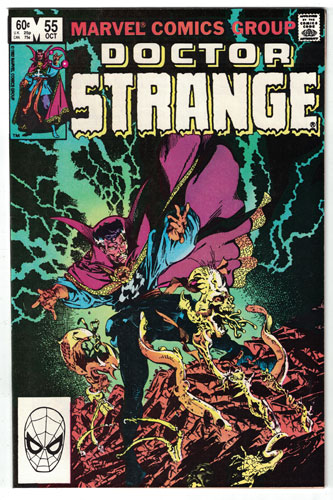 TO HAVE LOVED...AND LOST! Still lamenting the loss of Clea, Dr. Strange sequestered himself to his quarters and refuses to eat or talk to either Wong or Sara Wolfe about his feelings. After being haunted by an illusion of Clea, he is visited by Dakimh the Mystic, who forcibly takes Strange's astral form on a vision quest to see what the world would be like if he had never trained in the mystic arts. Taken to the temple of the Ancient One, Strange's master dismisses Dr. Strange as merely another ghost come to haunt him. Strange then suddenly finds himself bound in a straitjacket in an insane asylum. In Times Square, he's horrified to see that Doctor Strange is apparently a fictional character and is swarmed by fans of the latest Dr. Strange movie.