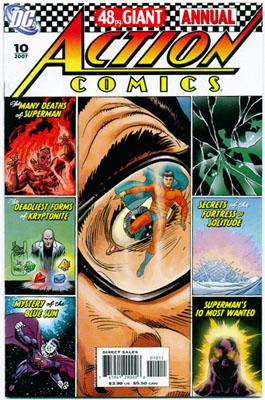 THE MANY DEATHS OF SUPERMAN. Luthor imagines what it would take to kill Superman (red sun solar fire, magic, brutal force, or kryptonite), as he's walking through a jungle looking for and finding a kryptonite meteor. WHO IS CLARK KENT'S BIG BROTHER? Young Clark Kent tries to stop a rocket from crashing. Out steps a floating boy, speaking Kryptonese, and then English. He said "Son of Jor-El," but doesn't remember anything. MYSTERY UNDER THE BLUE SUN. Several Hawkmen and Hawkwomen from Thanagar are investigating the loss of several police cruisers, and find them wrecked in the vicinity of a cubical planet. Bizarros appear, trash this cruiser too, and return to the Bizarro World. THE CRIMINALS OF KRYPTON. Zod, Non, and Ursa are being sentenced to the Phantom Zone by the Kryptonian Council. Flashback to an earlier time... THE DEADLIEST FORMS OF KRYPTONITE. Luthor talks about various kinds of kryptonite, imagining the effects of some of them. He ends up upgrading Metallo with all four kinds (green, red, blue, and gold) in preparation of starting a Revenge Squad.