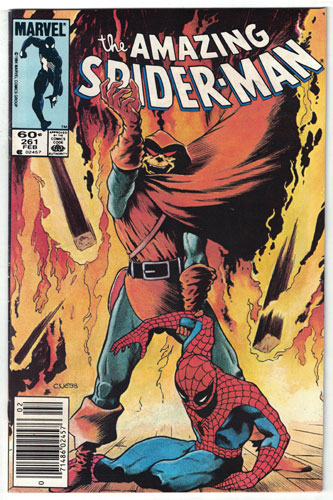 THE SINS OF MY FATHER! The Rose and Hobgoblin have captured Liz and Mary Jane and Harry has to trade their lives for his dad's old Goblin journals. Hobby is mad at only getting one journal as he knocks Harry out and takes him back to the Rose's headquarters. Harry attacks the villain using his own weapons. A fire breaks out in the warehouse trapping Mary Jane and Liz and Liz goes into labor. Spidey takes over Harry's battle with the Hobgoblin. Hobgoblin gets away as Spider-Man gets his pals out of the building. Liz and Harry head for the hospital. Spidey's black alien costume escapes from the Baxter Building.