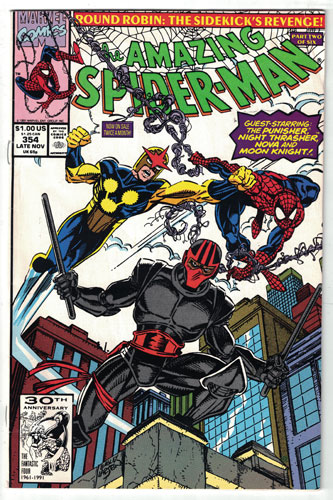 ROUND ROBIN: THE SIDEKICK'S REVENGE, Part 2 of 6: WILDE AT HEART! Cameo appearance of Punisher. After alluding Darkhawk and the wall-crawler, Midnight returns to the Secret Empire's headquarters and begins plotting his revenge. The new cyborg has two objectives: take over the Secret Empire...and destroy his former mentor Moon Knight. In the meantime the Spectacular Spider-Man stops by Avengers Mansion to make contact with the Fist of Khonshu and tell him that Midnight is alive. Several days later when the web-slinger spies Midnight fighting Nova, he alerts Moon Knight. And moments later the hostile teacher-pupil reunion gets underway.