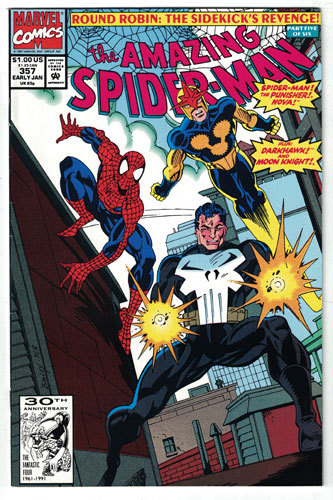 ROUND ROBIN: THE SIDEKICK'S REVENGE, Part 5 of 6: A BAGEL WITH NOVA! Appearance of Punisher. Midnight and the Secret Empire members arrive at their Queens location. The disguised and still-weakened Punisher tries to get a message to Spidey but passes out. The heroes, tired and testy, decide to call it a night. Punisher revives and as Number 3 frees Nova, who totals the transmission jammer and broadcasts a signal. Punisher then convinces his fellow Empire members to attack Midnight, who quickly defeats them. His cover blown, Punisher flees even as the heroes converge on Nova's signal. Spotting the Moon Copter, Darkhawk follows. The heroes battle Midnight and the Empire's troops joined by Dr. Franklin as a new technology-derived Thunderball who knocks out the arriving Darkhawk.