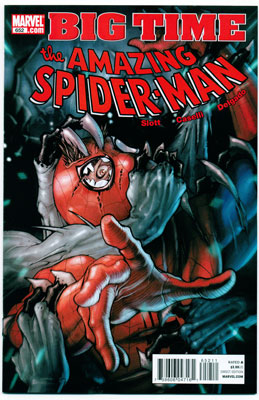 Story by Dan Slott. Art and cover by Stefano Caselli.

REVENGE OF THE SPIDER-SLAYER, Part 1 of 3: ARMY OF INSECTS. The Scorpion was just the beginning. Alistair Smythe, the Spider-Slayer, has returned, and Mac Gargan isn't the only subject he's upgraded. The Spider-Slayer is about to unleash an entire insect army on Spider-Man's world. And as part of his ultimate revenge, Smythe is out to turn one of Spidey's first ever victories into one of his biggest losses. Plus, an all-new story showing a hidden side of Mac Gargan's past.