SAGA is a very popular comic book series...you might be surprised to know that collected editions of SAGA outsell those of THE WALKING DEAD. SAGA is the sweeping space opera/fantasy of one young family fighting to find their place in the universe. When two soldiers, Alana and Marko, from opposite sides of a never-ending galactic war fall in love, they risk everything to bring their daughter, Hazel, into a dangerous old world. Fantasy and science fiction are wed in a sexy, subversive ongoing epic, described in solicitations as a cross between STAR WARS and GAME OF THRONES. The series has been met with wide critical acclaim, and is one of the most celebrated comics being published. It has also garnered numerous awards, including twelve Eisner and seventeen Harvey Awards between 2013 and 2017. The first trade paperback collection won the 2013 Hugo Award for Best Graphic Story. It has also been noted for its diverse portrayal of ethnicity, sexuality and gender social roles, and for its treatment of war. If you're not reading SAGA, you're missing out on one of the best comic book series ever created.

In modern comic publishing, it's common (and expected) for individual comic book issues to be collected into compilations of trade paperbacks and/or hardcovers, as well as other special compilations. Unlike the individual source issues, the collected editions typically stay in print for long periods and are less 'collectible.' If individual issues are out of reach or are not of interest to you or if you just need reading copies, the following collected editions of Saga comic books are the most recent in-print editions and are the perfect alternative to get started right away with Saga. The following compilations are presented in a chronologically-based suggested reading order with softcover editions before any hardcover editions (unless the only in-print editions are hardcover--these are integrated into the softcover list).

The first appearance of a character in comic book form is often the most valuable issue featuring that character. It's a nice place to get started in Saga, if it's within your budget.

The original presentation of an origin story or a retelling/recounting of it can be a good place to get started with a character or subject. The 'origin' of a superhero is typically the event or circumstances surrounding how they gained their powers and/or began fighting crime. However, Saga does not have a typical superhero-style origin story. The basic premise of the series is established in the first story arc.

Series beginnings are always great places to get started in comic books. Here is the Main Publication History for Saga comic books. As with most creator-owned, Image series, the story is contained in a single ongoing series and subsequently collected into trade paperbacks.

A key issue can be an acceptable place to get started with Saga, but they are more of a collector's checklist, as they can carry high price tags. 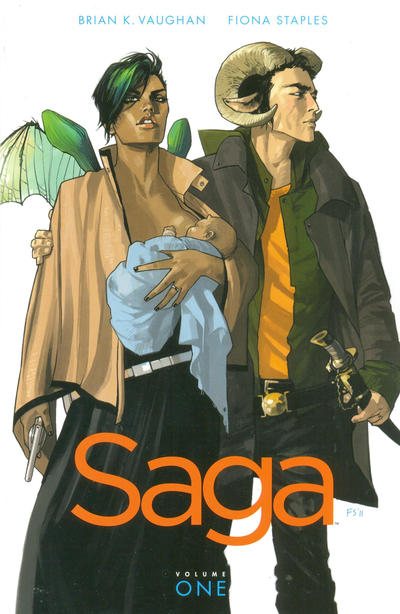