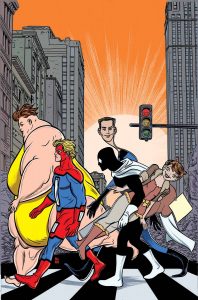 This one is guaranteed to be mostly self-deprecating, but probably also a fourth-wall breaking, dark, satirical comedy. Fans of the Deadpool film will likely also enjoy this comic. Michael Allred’s variant cover captures the essence of this series perfectly.

“All New, All Different?” No, thank you! New things are bad and different things are scary! Instead, why not join everybody’s least favorite super-hero team, the Great Lakes Avengers in their brand new–but not too brand new–ongoing series, Same Old, Same Old, Great Lakes Avengers! When the team gets reinstated as permanent members of the Avengers and uprooted to Detroit, the GLA has one more shot at super hero glory… but can they answer the call? Do they even have 4G overage here? Find out!”