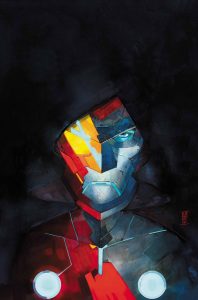 “There is a new Iron Man in town, and his name is VICTOR VON DOOM. The greatest villain of the Marvel Universe will try something new. Where Tony Stark failed, Doom will succeed. What is Doom’s Master Plan?”

I was a big fan of SUPERIOR SPIDER-MAN, where Doc Octopus took over Peter Parker’s body and masqueraded as Spider-Man for a couple of real calendar years to great entertainment value. INFAMOUS IRON MAN appears to be a similar spin on that concept with Doom becoming Iron Man. It won’t be quite the same premise as Superior Spider-Man if another Tony Stark and/or Iron Man is inhabiting the same continuity and people know it, so we’ll have to see how this one plays out. Part of what made Superior Spider-Man great was how Dan Slott could explore dark actions that Peter Parker would never take as himself. Tony Stark has done some questionable things, including starting a couple Civil Wars. What worse could Doom do? Any Brian Michael Bendis writing is a good bet. I’ll give this one a fighting chance to impress me with things I haven’t seen yet out of Iron Man.