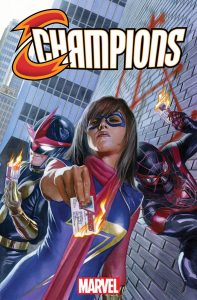 The Champions–the bronze-age, b-list team-up of Angel, Iceman, Hercules, Black Widow and Ghost Rider–have been even less popular than The Defenders, who haven’t been able to hold a steady title since their original bronze-age run. The original Champions are fairly forgettable, so, I’m skeptical of this one even though it’s a completely different roster. Mark Waid is a proven writer, so I’d be willing to give it one chance. I do really like the variant cover by Alex Ross. It’s poster-worthy.

“Following the fallout of CIVIL WAR II, Avengers Ms. Marvel, Nova and Spider-Man strike out on their own–joined by Cyclops, Viv Vision and the Totally Awesome Hulk! Six young heroes determined to change the world–and they’re only the beginning!”