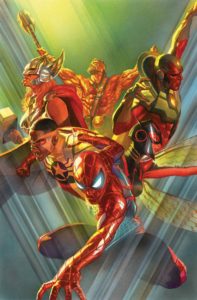 “Marvel NOW” is in full swing again this month with a whole host of new #1’s, including a new relaunch of AVENGERS. This is a perfect time to jump on. The line-up looks like: Captain America (Sam Wilson), Thor (Jane Foster), Vision, Wasp, Spider-Man (Peter Parker), and Hercules. The hook this relaunch appears to be overcoming dissention and distrust (following the events of Civil War II) among its roster in the face of evils that threaten the entire world. No problem. The tagline “KANG WAR ONE” implies we’ll see that time-travelling genius who may or may not still be splintered into various alternate versions of himself. I think there’s a cream for that.

“The time has come! Their ranks shattered by Civil War, their spirits weighted down by a toll both personal and spiritual, Earth’s Mightiest Heroes must find the resolve to stand united one final time against their greatest foe! Captain America! Thor! The Vision! The Wasp! Spider-Man! Hercules! When the dust settles, not a one of these valiant heroes will make it to the final page alive! This is KANG WAR ONE!”