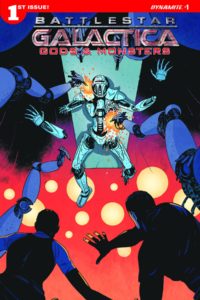 Dynamite launched an all-new *classic* Battlestar series and now issues an all-new series based in the reimagined Battlestar universe–you know, that awesome 2004 television universe. With a focus on Baltar, GODS AND MONSTERS is bound to be interesting. You know what would rock, though? I’d love to see Dynamite go back to some point in the reimagined series, split away from the television series events, and strike out on a different timeline with all-new events and a different ending in mind. Oh! Instead of at #1, they could start the numbering of this series with something like #34 (or whatever episode number would mark the diversion) and make it seem like we’re joining the series in progress. Or they could do like Buffy and call it SEASON 3, so they could have their commercially-acceptable #1 jumping-on point.

“All new stories from the ground-breaking re-imagined series! Baltar believes he was chosen by god–and now moves closer to being one himself when he constructs a living Cylon Centurion! Is it his greatest achievement or biggest mistake? Truly obedient or waiting for the perfect time to strike? Is it the protector of Sharon’s unborn baby or its greatest threat? Will the Cylon’s bloody history repeat itself?”