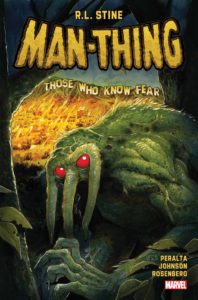 This is an interesting development: the Goosebumps mastermind himself, R.L. Stine, is writing a Man-Thing mini-series for Marvel. Not to be confused with DC’s Swamp Thing–who has a nearly identical origin story, Man-Thing is a scientist who transformed into a plant-matter creature by a combination of mystical energy and mutagenic compounds. A simple-minded beast, Man-Thing shuns human society, but is often an accidental hero when stumbling upon crime. His empathic abilities and his partly mystical origin make him an unusual Marvel citizen and a mainstream outsider to be sure. Stine’s spin will surely make for an interesting read.

“MARVEL WELCOMES R.L. STINE! Beloved writer R.L. STINE (Goosebumps, Fear Street) brings his special brand of horror to MAN-THING!  After working for years, MAN-THING has regained his ability to speak and has taken Hollywood by storm…But when an ancient and mysterious danger threatens the swamp, Man-Thing is going to have to choose between his new life and celebrity, and the world he used to call home. PLUS! A bone-chilling new horror story, written by the master himself, R.L. STINE, and illustrated by the incomparable Daniel Warren Johnson!”