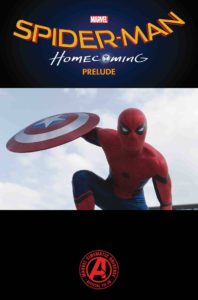 When I first saw this, I immediately thought it was a prelude to the upcoming film in the same way Marvel did a Doctor Strange prelude to that movie. And it is! But, it’s an adaptation of the awesome Captain America: Civil War, in which Spider-Man makes his MCU debut. It’ll still be very cool, just not new material for us avid MCU fans.

This is a perfect jumping-on point for newbies! Check out Spiral Comics’ Get Started In Spider-Man (Peter Parker) page!

” YOUR FRIENDLY NEIGHBORHOOD SPIDER-MAN SWINGS INTO THE MCU! PETER PARKER is just your average, nerdy, tech-loving teenager…until an unexpected turn of events lands him with the power to cling to walls and the proportionate strength of a spider! SPIDER-MAN’s foray into the Marvel Cinematic Universe begins here, with part one of an adaptation of the blockbuster Marvel’s Captain America: Civil War, which sees a rift between CAPTAIN AMERICA and IRON MAN rend a schism between the Avengers…with Spider-Man in the middle of it all!”