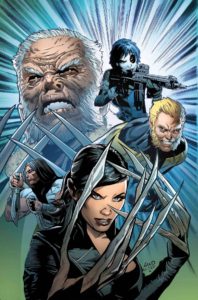 I’m always excited to read more about the Weapon X program. The promise of a new WEAPON X series (offered for pre-order in this month’s Preveiews Catalog) is the promise of more super killers from the same program that produced fan favorites such as Wolverine and Deadpool. How long the new players last against the originals is another matter. The role of the Weapon X program has expanded and deepened over time in the Marvel Universe. What began as the simple mention of Wolverine’s code name–Weapon X–in his first cameo appearance in THE INCREDIBLE HULK #180 from 1974 has blossomed into an program within a larger program (the Weapon Plus Program) that produced several other agents. We’ll see what this new direction contributes to the mythos. Anyway, Greg Land does beautiful covers.