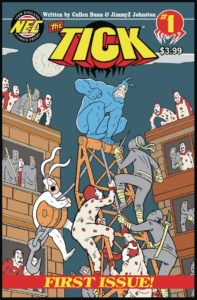 With a new television series coming this summer from Amazon, it’s only right that NEC launches another Tick comic book series. This one written by Cullen Bunn!

“Amazon is bringing The Tick back to TV this summer. And NEC is bringing The Tick back to comics in August with an all-new continuing color series. Written by Cullen Bunn (Deadpool Kills the Marvel Universe, X-Men Blue, Harrow County) and drawn by Douglas Paszkiewicz (Arsenic Lullaby), The Tick and Arthur confront the dire menaces of ninjas and murder clowns, while also flashing back to blasts from The Tick’s heretofore unexplored past. Join us for fun as Bunn imprints The Tick with his own creative style of storytelling.”