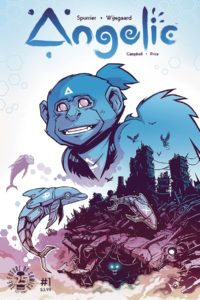 This new one from Image looks very interesting. At first glance it reminds me of David Brin’s Uplift universe, which he created in his series of novels from the 80’s and 90’s. In general, the Uplift universe is a more cheery sort of science fiction than the deluge of dystopian apocalypses we’ve been getting recently. The universe is still a dangerous place, for sure, but humanity is trying to rise above, not just get along by whatever means are necessary.

“WINGED MONKEYS. TECHNO-DOLPHINS. QUANTUM ALLEYCATS. – Humanity’s long gone. Its memory lingers only as misunderstood rituals among mankind’s leftovers: the genetically modified animals they used and abused for eons. But for one young flying monkey, QORA, the routines are unbearable. All she wants is to explore. Instead she’s expected to settle down, to become a mother… to lose her wings. Eisner nominee SIMON SPURRIER (The Spire, CRY HAVOC, X-Men Legacy) and rising-star CASPAR WIJNGAARD (LIMBO, Dark Souls, Assassin’s Creed) present your new bittersweet adventure obsession: teenage rebellion and animal antics amidst the ruins of civilization. Think WALL-E by way of Watership Down. Fly, my pretties.”