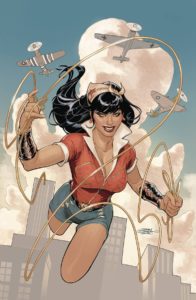 Another DC Bombshells series means more 1940’s era pin-up versions of your favorite super-heroines! What started out as a design for four statues in 2013 has grown into a whole brand on its own. Before the comic series were produced, a variant cover month in 2014 across DC’s titles and another in 2015 paved the way for digital–then print–comics.

“The Bombshells are back in an all-new series. As our new tale begins, the year is 1943, and Wonder Woman is called to Arizona for help by two young girls named Cassie Sandsmark and Donna Troy. The girls’ friends and families are being displaced from their homes and forced into internment camps. To save them, can Wonder Woman fight against the same people she once fought alongside?”