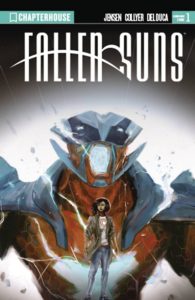 This looks like a cool sci-fi epic. The writer, Van Jensen, has previous credits on Green Lantern Corps and The Flash, so even though it’s a smaller publisher, I expect it has more potential than usual.

“The alien warrior called Pharos came to our world to deliver a warning: The Borealis are coming. Instead he has wreaked havoc across the Earth and left death and destruction in his wake. Now, he awaits execution for his crimes deep in a H.A.L.O. facility. Can brilliant young Equilibrium agent Parminder Patel unravel Pharos’ history and uncover the secrets behind his dire warning, opening the way to his redemption? Can she convince him to rejoin the fight and save Earth? Find out in Chapterhouse’s new sci-fi epic series, written by Van Jensen (Green Lantern Corps, The Flash), with art by Neil Collyer (Heavy Space) and Leila Del Duca (Shutter, Afar).”