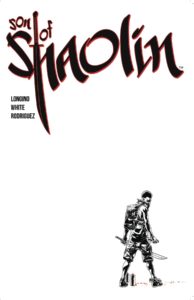 Sweet, I’m always up for some martial arts mayhem. Especially if it involves the last living descendant of a secret sect, because you know those kinds of sects usually have the best Kung Fu.

“A kung-fu epic set in the back alleys and subway tunnels of Harlem, New York. Kyrie, an aspiring street artist who is struggling to make ends meet, learns that he is the last living descendant of a secret sect of ancient Shaolin elders. Confused and unsure of where to turn, he finds a father figure in the mysterious Master Fong. Fong trains Kyrie in martial arts in anticipation of an attack from Red Fist, a relentless killer who has already murdered the rest of Kyrie’s bloodline. Introduction by AISHA TYLER. Film rights recently sold to Sony / Columbia Pictures with DWAYNE ‘THE ROCK’ JOHNSON attached to produce.”