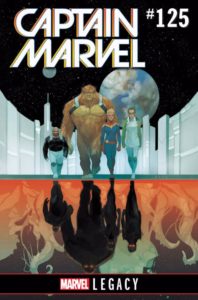 Hey, Marvel Fans, It’s MIGHTY CAPTAIN MARVEL #125! Exploring the dark origin of Captain Marvel! Legacy launches with a bang this month, as Marvel returns to legacy numbering with all of their long-running titles. This is a major jumping-on point for fans, both new and old.

“DARK ORIGIN Part 1. As Captain Marvel, CAROL DANVERS has traveled to almost every inch of the planet – and beyond. Now she’s heading to somewhere uncharted, where there’s no familiar face to be seen except for…her own. Join Carol on her new cosmic journey through the past and future as Captain Marvel takes flight in an adventure you won’t want to miss. The earth-shattering secrets of her Dark Origin are finally revealed, and the Marvel Universe will be forever changed. PLUS: Includes 3 bonus MARVEL PRIMER PAGES. Story by Robbie Thompson and a TBA artist. Rated T+”