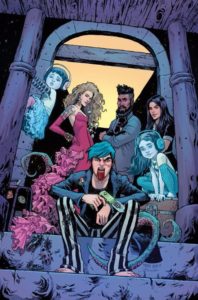 Whoa, this one looks like it might be a genre-bender. Peter Milligan is known for some whacky stuff, but this one from him and Tess Fowler feels way out there. This title kicks off IDW’s new imprint, Black Crown. It has a Vertigo-ish feel.

“Kafka meets King Lear by way of Young Frankenstein in KID LOBOTOMY, a dark, demented, monthly satire that follows a dysfunctional family of hoteliers. Will sibling rivalry, seduction, and shapeshifting eventually lead to sanity or salvation? Big Daddy is a rich hotelier who, in a cracked echo of King Lear, appoints his youngest descendant to manage The Suites, a peculiar hotel located behind the Black Crown Pub. Affectionately known as Kid, his good looks and swagger can’t hide a rough childhood of strange therapies and brain operations that have awakened inner demons and psychodramas. This of course makes him eminently qualified to perform lobotomies. A failed rockstar/successful madman gets one last change to prove his worth-and regain his sanity-by turning the hotel that was once his childhood sanctuary into a lucrative business, despite a host of obstacles-including his own sister-who would love nothing more than to see him fail miserably. Kid Lobotomy is co-created/written by Peter Milligan (Shade, the Changing Man, Brittania, Hellblazer) and illustrated by Tess Fowler (Rat Queens) with ‘A’ covers by Fowler, a ‘B’ cover by Rory Phillips, and a retailer incentive cover by comics superstar Frank Quitely (Jupiter’s Legacy, We3) Bullet points: Grab your cockroach. Black Crown debuts here. Special 23 pages of story in the first issue. Letter columns, creator interviews, process pages and more. Previews for upcoming Black Crown series.”