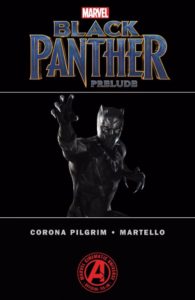 Here’s another tie-in mini-series to the Marvel Cinematic Universe. Can’t get enough of this stuff!! If you’re enjoying the movies as much as the next person, you should be picking up these in-continuity comic books. Just sayin’.

“Wakanda. The most technologically advanced nation in the world – and protected by the mighty BLACK PANTHER. Learn how T’CHALLA became the legendary hero of Wakanda in this ALL-NEW, NEVER-BEFORE-TOLD tale set in the Marvel Cinematic Universe. See how the mantle was passed to the future king, in a time when super heroes were just emerging in the larger world, before this winter’s BLACK PANTHER film hits theaters. Rated T”