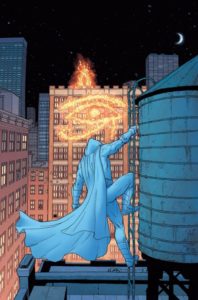 The Moon Knight is one of those interesting characters from Marvel’s history who never really achieved any mainstream fame. Everyone knows Spider-Man and Captain America, and probably Daredevil. But, Moon Knight?!? Who the heck is he? Well, he’s worth another look during Marvel’s Legacy relaunch. Moon Knight has always suffered from schizophrenia and multiple personalities, but Brian Michael Bendis and Alex Maleev did a re-interpretation of Moon Knight in their 2011 series, where he was assuming the costumed identities of Spider-Man, Wolverine, and Captain America. See, he’s slightly insane. And that casts questions on whether Marc Spector really is the Egyptian god Khonshu’s avatar on Earth or not. Moon Knight stories are at their best when reality is in question, and the title of this new story arc says it all.

“CRAZY RUNS IN THE FAMILY Part 1 A new day is dawning and with it comes an enemy unlike any that Marc Spector, Moon Knight, has ever faced. Moon Knight has always been a protector from the shadows, but this new enemy is looking to extinguish that shadow with blinding light and fire. Get ready for the introduction of Moon Knight’s greatest nemesis. PLUS: Includes 3 bonus MARVEL PRIMER PAGES. Parental Advisory”