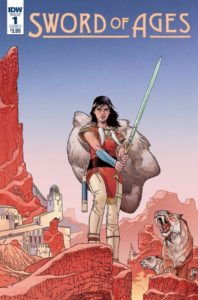 This one from IDW looks pretty cool. Another cross between fantasy and science fiction with strong visuals.

“A mythic origin story you never expected to see. This winter, the Sword will be drawn for the first time ever, courtesy of writer/artist/Locke and Key co-creator Gabriel Rodriguez in a five-issue miniseries adventure of epic proportions. A young woman will become the first wielder of the most famous sacred weapon of all time to champion for her world’s survival, inspiring a legion of heroes to join her struggle against a merciless alien force. The line between science fiction and magic might get fuzzy, but the line between heroes and villains will be drawn in blood. Bullet points: * Alien worlds. The sacred sword. Brave knights and horrific demons. * The legendary sword is first drawn here.”