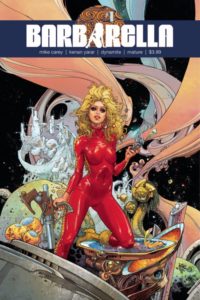 It’s a wonder Barbarella hasn’t been revived before now. It’s science fiction–even if it’s on the absurd side at times–but obviously, that’s not what Barbarella is most known for. The 1968 film adaptation starring Jane Fonda is really only one data point in the liberated universe that is Barbarella’s. This series is guaranteed to contain many more planet-romping adventures.

“Earth’s star-crossed daughter is back. When Barbarella wanders into a war zone, the theocratic rulers of Parosia arrest and imprison her. A prison break is brewing, but now that she knows what the Parosians do to their own citizens Barbarella decides to make this fight her own…”