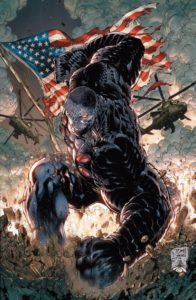 DC kicks off a new wave of superheroes with DAMAGE, THE IMMORTAL MEN, and THE SILENCER. Damage doesn’t look half bad. Sorry, if I can’t get too excited about a wave of superheroes, as we’ve seen this sort of thing many times…a publisher trying to instantly create a whole universe or a whole stable of characters. What inevitably happens is most are mediocre, some outright flop, and maybe one or two catch. If the publisher is established, as DC most certainly is, than when the effort dwindles, the publisher will try to work the catchy ones into its existing lines. If the publisher is an upstart, it usually just goes out of business. It’s sad, but that’s the reality. If you’re a speculative fan, as most tend to be, you should look for the diamonds in the rough with these wave launches. As I said, Damage doesn’t look half bad. Time will tell.

“Tasked as the government’s own living, breathing, ticking time bomb, Ethan retains no control when the monster takes over. Cheaper than a nuclear warhead and twice as effective, Ethan fights to rein in the damage he unleashes when the beast inside him springs free for one hour a day. With everyone around him in danger, Ethan struggles to contain the DAMAGE he inflicts on the DC Universe. RATED T+”