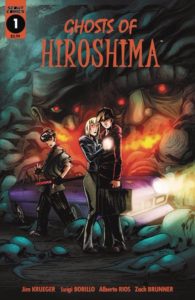 This is a very intriguing storyline. Guilt drives a man to investigate a theoretical way to break someone out of hell. His investigation may have created the existence of just such a way that had never existed…and some denizens on the other side are pretty excited about it.

“Hell doesn’t always come in a hand basket; sometimes it comes in a briefcase. Guilt is the greatest ghost of them all. For James Henricherson, the guilt of a mistake made many years ago continues to haunt him. It dogs his every move. It keeps him from sleeping. He believes he has condemned an innocent soul to eternal suffering and pain. And he has worked for years to invent a way to free this soul from Hell itself. But Henricherson’s attempts and his theoretical success has stirred the condemned souls of Hell, who see this as a way to get power in Hell, to become the gatekeepers of a place that, before this moment, had no such thing as a door.”