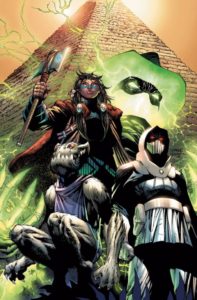 Here’s another title in DC’s ‘New Age of Heroes.’ I’ve expressed my muted interest in these sorts of whole waves of superheroes from publishers. They don’t tend to last, but a few characters may survive the creation to live on in the publisher’s universe proper…if the publisher isn’t an upstart. THE IMMORTAL MEN seems to be employing the old trope of some secret society having protected humanity from the shadows since forever, but we’re only learning about them now. I have yet to see this mechanism work effectively. I’m sorry, I don’t see this one lasting. You know what would be more effective, but a logistical nightmare? What if a major publisher like DC or Marvel planted little scenes in one or two books in their publishing line per year for a decade. Then launched a title out of those developments. Time and fan speculation will have built massive anticipation. And there would be some actual recorded history. Anyway, if DC or Marvel is interested in hiring me as a consultant, I’m available.

“‘THE END OF FOREVER’ part one. There is a secret history to the DC Universe of heroes who have protected humanity from the shadows since the dawn of time…and who can live forever. Enter the Immortal Men. The team, headed by the Immortal Man, has waged a secret war against the House of Conquest for countless years-but Conquest has dealt a devastating blow. When their base of operations, known as the Campus, is savagely attacked, the Immortal Men must seek out their last hope-an emerging metahuman known as Caden Park. Caden’s emerging powers may be able to ensure the Immortal Men’s survival-but will Conquest get to him first? RATED T+”